Past and present collide in Michael Phillips' new book. Don't miss the chance to win a copy! 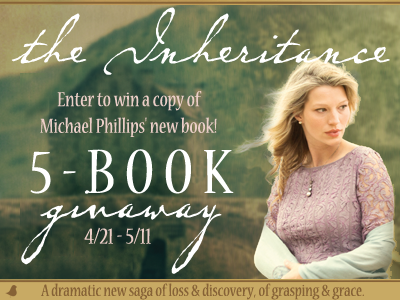 My Review:
I really enjoyed "The Inheritance," as it is well-written with so many layers and so much depth to the characters.  It is so difficult to deal with the death of a loved one, and so many issues can arise at this time as well.  Michael addresses some of these issues, including what happens when there is no will, and claims are placed.   Even when there are wills, there is still division, fighting and resentment.  When a claim is placed, this entire community is rocked.  Michael does an amazing job with creating the scene, so much so that I felt as if I was right there in the midst of the action along with the characters. I liked Loni instantly; she is a great main character grasping with her past and trying to find where she fits in the world.  I enjoyed learning about Scotland and learning about a different culture in this book, it was fascinating to me and loved how that is woven throughout the storyline.  I am eagerly waiting book #2 in the series to find out what happens next.


To read other reviews included on this blog tour, go here!


*Thanks to the Litfuse Publicity Group for including me on this blog tour and for the complimentary copy of this book in exchange for a honest review.*