"Start With Me" book tour! 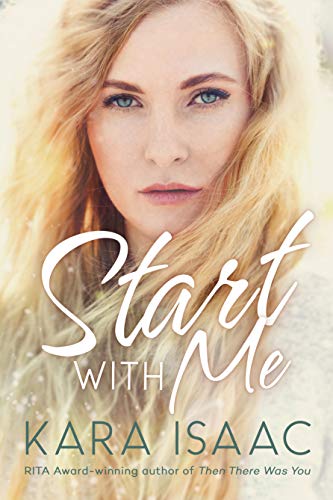 "Start With Me" is the first book that I have read by Kara Isaac and now I am ready to read every single other book written by her!  This was such a great read as the characters were so real, and dealt with real-life issues, there was no glossing over the rough times.  Lacey has worked so hard and so carefully for the past decade to build up her life and her reputation at her job and she is going to fight for the promotion that she deserves.  When the company is merging she comes face to face with a man from her past who works for the sister company; however this man does not remember Lacey at all or their brief encounter.  Victor is not the man he was three years ago; however his family and others he has come into contact with have a hard time believing that.  Victor is determined to hold firm onto a spot in the newly merged company to help prove this.  As Victor and Lacey are paired up on team adventure that is part of this new merger, they find out more about each other and themselves.
Lacey has built a wall around her heart and has tried to protect herself from being like the rest of her family; she has escaped from her hometown and struggles with the lives that her family chooses to live.  Lacey has never really been honest with anyone, but this changes with the more time she spends with Victor.  Victor was an alcoholic and womanizer and he has so many regrets, even more so that he cannot remember all that he has done.  However, he has worked hard to prove to himself and others that he is no longer that man; one of the reasons he has not dated anyone or had any kind of relationship with a woman for three years.  However, Lacey makes him want to break that streak.
I loved both Lacey and Victor in this book and their stories and their strength and determination, as well as their vulnerability with each other.  However, I also loved the minor characters and their roles, and was thrilled to see that there are books that tell their stories, so I am off to read those to find out more about what got those characters to this point!

*Thanks to Just Read Publicity Tours for including me on this reviewer tour; I was given a complimentary copy in exchange for a honest review.*
Posted by Kristie at 9:14 AM