"The Sound of Distant Thunder" 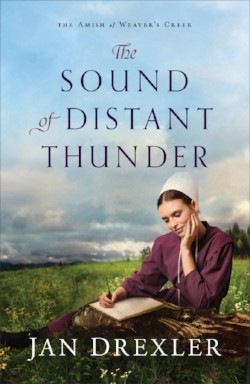 "The Sound of Distant Thunder" is book #1 in Jan Drexler's new The Amish of Weaver's Creek series.  Katie and Jonas have been in love with each other and wish to marry; however they have been told to wait until they are a bit older.   Although war and fighting are not acceptable in the Amish culture and they are to remain free from it and politics in general, it becomes impossible when a name is brought up in a draft.  Jonas is wishing to begin his life with Katie, but he is willing to make a sacrifice and go off to war in his brother's place when his brother's name is drawn, his married and with children brother.  This will turn into a test for everyone involved and a time of anxiety and hope.


This is an excellent start to a new series!  I have always enjoyed reading books set in the Civil War time period and this being an Amish novel adds an extra element to the story as well as war does not align with the Amish  beliefs.  However, war is still just as devastating to the Amish as it is to the Englishers and no matter one's background, those involved in the battles have to deal with the same worries and trials.  Jan does a great job with bringing the story to life as the characters are so real and the time period and setting.  It is a great mix of historical details along with fictional characters.  The minor characters add so much to the story as well as the extended families are so important and their interactions and relationships with the  main characters.  I am looking forward to book #2!

*Thanks to the Revell Reads Blogger Program for the complimentary copy of this book.*
Posted by Kristie at 2:39 PM