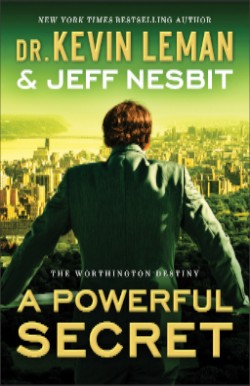 "A Powerful Secret" is book #2 in The Worthington Destiny series written by Dr. Kevin Leman & Jeff Nesbit.  This series deals with a powerful family, a family that has the means to help out so many causes and also be influential leaders in the country, and a family that has numerous connections around the world.
Sean is the focus of this second book and he is the son whom has always felt as if he does not really belong in his family.  Sean has lived his whole life feeling as if he cannot ever get his father's approval as his father has been focused on Will, the oldest child and the one whose path has been set for him.  When a last-minute withdrawal from a political race leaves Sean and seemingly everyone else with questions, this spurs him to take action in his own life and try to fight against how everyone perceives him.
While reading this I felt as if it was such an appropriate book for this time as this is a big election year and tensions are high in regards to politics.  This book is written in a way that I was drawn into the drama, the secrets and the relationships between all of the characters.  I highly recommend this book (although if you haven't read book #1, you should read that one first!), you will not be disappointed!


*Thanks to the Revell Reads Program for the complimentary copy of this book in exchange for a honest review.*
Posted by Kristie at 6:39 PM