Book Review - "Choices of the Heart" 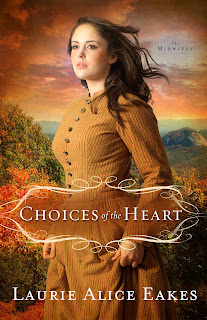 "Choices of the Heart," book three in Laurie Alice Eakes' The Midwives series, will draw you right into the story from the very beginning!  When we start the story Esther is packing her things and preparing to leave to escape the rumors and scandal.  Esther's family does not want her to leave and Esther does not want them to know where she is going, so she leaves under the cover of darkness with two individuals whom she does not know.  Esther believes she is going to be a school teacher.  However, the real purpose that Esther has been brought to Virginia is to become a wife.  Esther finds herself being pursued by two men; two men whom want to become her husband and they are on opposite sides of a family feud throwing Esther in the midst of it all. Esther must learn to trust, follow her heart and do what she knows she must do in the midst of hardships, deception and love.

The author really brings alive the time periods with her descriptions and the events that take place in the story.  Esther is a very strong main character and one I admired her throughout the story.  This book is filled with everything to make a good story - scandal, romance, and deception.  If you have enjoyed this series, you will enjoy this latest book as well!

“Available January 2013 at your favorite bookseller from Revell, a division of Baker Publishing Group.”
Posted by Kristie at 5:10 PM