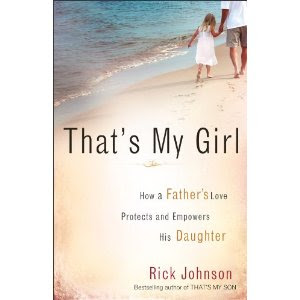 What better way for dads of girls start out the year than reading Rick Johnson's book, "That's My Girl." This is a honest, man to man book that I would recommend for any man who is the father of a daughter. This would also be a great resource to use in a men's small group as each chapter ends with questions for further thought and discussion.

Rick shares his own experiences with raising a daughter and his perspective on different issues along with research and stories from other individuals. Rick encourages dads to bond with their daughters even though this may not be as natural for them as bonding with their sons, however this is so important. Dads are role models for their daugthers as to the males that they will date and marry in the future. Rick addresses different aspects of role modeling including treating women, especially their wives/daughter's mother with respect, care and love as this is how the daughter is going to expect to be treated by her future husband. Daughters are only little for just so long and now is the time for dads to build on their relationship and be good example for their daughters. Not only is this an excellent read for dads, but it is for moms as well as it will open moms' eyes as to the role that the father plays and she can be an encourager to him to fulfill this role in the best way possible.

This book is straight-forward, yet it has a gentle approach as well so that it is not intimidating or "preachy." I would highly recommend Rick's other books as well that focus on sons and also being a better spouse.

“Available January 2012 at your favorite bookseller from Revell, a division of Baker Publishing Group.”
Posted by Kristie at 6:35 PM