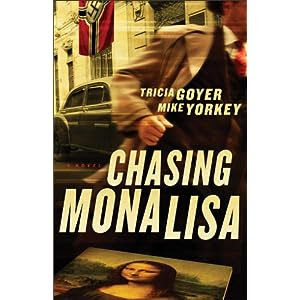 The most prized possession of France, the Mona Lisa painting, has been hidden away during World War II as the Germans have been taking French paintings. Now on the verge of Paris being liberated, someone is out to get the Mona Lisa and many find their lives in danger. Tricia Goyer and Mike Yorkey take you on a breath-taking, high-energy journey in their novel, "Chasing Mona Lisa" as four individuals race against time to save this masterpiece.

Bernard has given so much of his time and life to the resistance effort in France. Much of his effort he has not shared with Colette his girlfriend. However, Bernard is not the only one holding back as Colette works as curator at the Louvre and she knows the exact location of the Mona Lisa, but she is being blackmailed by a high-power German gentleman. Eric and Gabi appear to the general public as working for the Red Cross, but are in fact Swiss OSS agents sent on missions and are caught in Paris on the day of liberation. Meeting up with Bernard and Colette saves their lives on this day, but soon they find that they are all fighting for lives and not just from the Germans.

This novel is filled with so much historical detail from the World War II period and the culture and pride for one's country is so rich. I was immersed in the story from the very beginning and enjoyed it all along the way throughout the various twists and turns. All of the characters were well-developed, even the minor characters. I loved the roles that the banker, Captain Palmer, the Countess and Kristina all played as well. This is a wonderful novel and I am going to read the authors' previous novel, "The Swiss Courier" and learn more of Gabi's story!

“Available January 2011 at your favorite bookseller from Revell, a division of Baker Publishing Group.”
Posted by Kristie at 9:51 AM