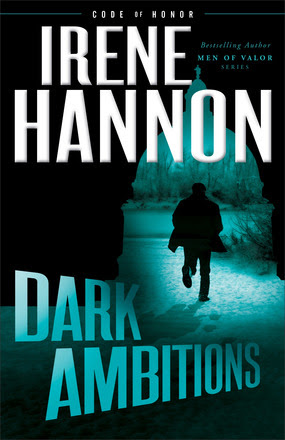 "Dark Ambitions" is such a great conclusion to Irene Hannon's Code of Honor series, and while I wanted to keep on reading to find out what would happen next, I was not ready for the book to be done.
Rick is the last of the Treehouse Gang to be featured in this series and he is the main character of this book along with the PI, Heather, who becomes involved in his life both professionally and personally.  Rick lives a quiet life during the winter at his home which is also a camp for foster kids during the summer months.  However, when he spots blood and a few items left there, he knows that he has had a visitor and that the man whom he knew while serving the country is in trouble.  What kind of trouble, he is not sure and this is only the beginning of the many questions that soon arise.  While Rick and Heather try to find Rick's buddy, there are a few people who do not like them poking around and asking questions and will stop at nothing to be sure that things go according to plan.

This story is so fast-paced and is a nice mix of romance and suspense.  The attraction between Heather and Rick is so strong, but yet Rick is a client and is therefore off-limits, and is very fitting given the previous books involving the other employees at Phoenix Inc.  Irene does a fantastic job with the characters and their interactions as they become so real.  Heather's father is a minor character in this book, but I really liked him as well, and the sweet relationship he has with his daughter; I love their traditions and the time that they make to spend together.  I highly recommend this book, but really this entire series!  If you are a fan of romantic suspense novels, do not miss out on this one!

*Thanks to the Revell Reads Program for the complimentary copy of this book.*