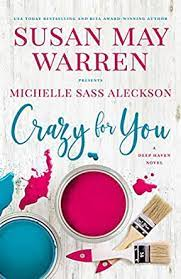 My Review:
Ronnie gave up her life in the military to come home and care for her younger brother; however living in Minneapolis is not working out as Tiago has found himself in some serious trouble.  Former teammate Cole has talked up Deep Haven and has worked to get Ronnie a position on the newly formed Crisis Response Team.  However, not everyone in the community is happy about an outsider coming in when they believe one of their own should have gotten the position.  And Ronnie's attitude and mannerisms does not exactly win over several community members during her first interaction with them during an emergency.  Peter is constantly finding himself being pulled between two families, his biological father's family and his step-father's family.  Having some major decisions and a vote coming up puts even more pressure on Peter.  As the tensions rise within the families, and the community, more and more of the young people are finding themselves getting into trouble, with Tiago in the midst of it.  As Ronnie struggles to find her footing in her job, in the town and at the same time trying to protect her brother, she is not sure that this town in the place for them.
This book is such a great addition to the Deep Haven Collection series.  There are so many characters who have been part of the original Deep Haven series and this new series as well that it feels like coming home while reading.  Peter has been mentioned in previous books and I was so happy to have him finally be a main character and have his story be told!  Also, Cole and Megan's story was told recently and I loved seeing how their lives are going following the end of that book.  "Crazy for You" weaves together so many characters, so many storylines and seems to be paving the way for more stories to be told in the future (so excited that Vivien's story is next!).  There is mystery, family drama, current societal issues and concerns and romance all woven together in this book making it a quick and great read!  This is one not to be missed!
*I voluntarily reviewed a complimentary copy of this book which I received from the author. All views expressed are only my honest opinion.*
Posted by Kristie at 2:21 PM