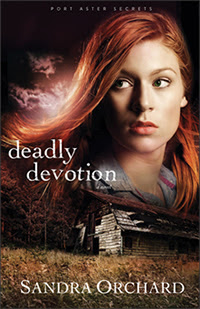 "Deadly Devotion," book 1 in Sandra Orchard's Port Aster Secrets series, is an excellent start to the series as it drew me into the storyline and the characters' lives and has me waiting for book 2 to be released!

Kate's mentor is dead.  The police have concluded that it was a suicide, Kate believes that Daisy was murdered.  Kate marches into the police station intent on convincing them to reopen the case; however she is met with resistance and decides to take the matter into her own hands.  However, Kate is happy to have some help from detective Tom Parker, but Kate begins to question if she can actually trust him.  As Kate delves more and more into the case, she uncovers secrets, secrets that people want left as secrets and motives for wanting Daisy to be gone and now possibly herself gone.  Will Kate go too far to uncover the truth?

This is an exciting read filled with many twists and turns throughout the story as various people are suspected (for good reason!).  At first I felt as if the story was jumping around quite a bit, but after a few chapters I was really drawn into the story and my attention was held that I just wanted to keep reading to see what would happen as I found out along with Kate that people are not whom they appear to be.

For more on this book, visit the author's website for some "bonus features:"

http://sandraorchard.com/extras/bonus-book-features/
“Available June 2013 at your favorite bookseller from Revell, a division of Baker Publishing Group.”
Posted by Kristie at 10:14 PM