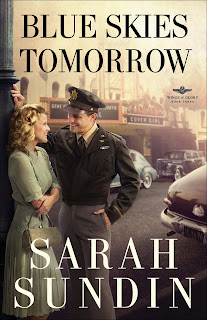 I have been a fan of Sarah Sundin ever since I first started her first book in the Wings of Glory series and her latest novel, "Blue Skies Tomorrow," the third book in the Wings of Glory series is her best yet! Set during World War II, "Blue Skies Tomorrow" focuses on Raymond Novak, but his 2 brothers, the main characters in her previous two books play prominent roles as well.

Raymond wants to be a preacher just like his father, yet he feels pressured to do something and be a hero during the war instead of just taking the "safe route." Helen Carlisle who has lost her husband in the war is facing her own challenges with putting on a front to the townspeople as her heart really is not grieving for her husband as everyone would expect her to. However, no one knows Helen's secret and what her life was really like with her husband, that is no one knows until she begins to open her heart to Raymond. Separately and together Raymond and Helen are dealing with struggles in their own hearts and lives. Raymond is transferred within the military and placed in imminent danger and Helen finds herself in danger at home and also at work. Together and with the help of Raymond's family these two find happiness and peace in all areas of their lives.

This book is well-written and a great account of life during World War II. I love how Sundin builds upon the previous 2 stories involving the Novak boys and I felt like I got to know the whole family so much better and not just the main characters. Helen and Raymond are both characters who the readers can easily identify and empathize with. The home issues that Helen deals with are unfortuately very real for many people today. I liked that the details and situation were not glossed over, but dealt with highlighting Helen's emotions and strength and relying on others for help and guidance as well. The book concluded nicely as well as it tied up the stories of all three Novak boys nicely. I have enjoyed this series and look forward to other series hopefully from Sundin!

"Available August 2001 at your favorite bookseller from Revell, a division of Baker Publishing Group."
Posted by Kristie at 11:53 AM