Book Review - "The Girl in the Gatehouse" 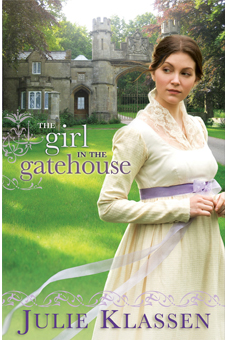 Influenced by Jane Austen's life and work, Julie Klassen brings to readers her newest novel, "The Girl in the Gatehouse." Mariah Aubrey is banished from her family and home to a relative's gatehouse. While here Mariah writes and publishes novels under the name of "Lady A" for fear of further embarrassing and angering her father. Keeping her past a secret and also her writing, Mariah is guarded with those around her, yet the secrets begin to be revealed through various encounters on the estate's premises. Captain Matthew Bryant is trying to win the approval of a lady's father and this lady's heart, but throughout the process, Bryant realizes he is losing his heart to Mariah, the woman living in the gatehouse on the estate he is renting.

Set in the early 1800's the descriptions are so vivid the reader is transported back to this time and society. Klassen's book is filled with lovable characters such as Mariah and Matthew. However, Dixon and Martin are characters that add so much to the story as do the characters living in the poorhouse and Hart as well. I thought the characters are all well-developed and enjoyable to read about. I also think the quote that is included in the heading of each chapter is a nice touch. I recommend this book to historical fiction readers as it is filled with intrigue, scandal and romance.

* I received a complimentary copy of this book in exchange for a honest review.*
Posted by Kristie at 6:14 PM